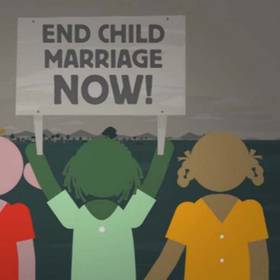 What’s wrong with that?

Africa is lagging way behind the rest of the world in one key issue – making sure its girls don’t marry too young – in other words when they are still children. In fact, in just over 30 years nearly half of the world's child brides will be African according to the latest report by the United Nations Children's Fund (UNICEF).

The report shows that in all other regions of the world there are fewer child brides each year. But Africa lags behind in fighting an age-old tradition of marrying off its girls too young.

Why is Africa not keeping up? One reason is because the population is growing fast, and the numbers of child marriages are not dropping fast enough. The African Union launched a continent-wide campaign called End Child Marriage in 2014. But it seems it is not working fast enough and they’ve extended it to 2017.

But is getting married as a child really such a problem?

Yes, it is. When children (boys or girls under 18 years old) get married, their chances for a healthy, successful life decline drastically. Most often the marriage locks them into a life of poverty. Why? Child marriages mostly happen in the poorest communities and end up making everyone poorer. Instead of finishing school and getting a job, married girls are often pulled out of school by their husbands. Even if they are not, they usually fall pregnant and that is the end to her education. She is also more likely to be the victim of violence and become infected with HIV.

Marrying as a child also has big health risks. Child brides face higher risk of complications, injury and death in pregnancy and childbirth. Girls under 15 are five times more likely to die in childbirth than women in their 20s. Their babies are at risk too: when a mother is under 20 her baby is less likely to live beyond its first birthday.

There are no winners when a girl marries as a child.

Stand against this practice. If you see a friend going through this, contact the police. Many girls fight this and win. What do you think is a good age to marry?

Type your comment here...it is not good because this age you are still young you stoll need to focus on your future & enjoy life without

on my opinion thats really not a gud idea, coz we actually say say we become adults @18

View more comments
Have a tip related to this article? Click here it share it!
© 2020 UNFPA, Ford Foundation