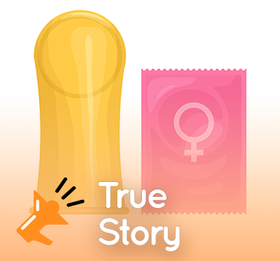 True Story: He gave me a female condom:

But how do I use it?

Sometimes you're getting it on with your partner but neither of you has a condom - and you just carry on anyway. We all know about the risks of unprotected sex. But once you're excited, it can be really difficult to say no to a guy - or at least that's what I thought.

Then I met this really nice guy.

We went on a few dates. I knew I really liked him and I decided I was ready for us to get intimate. But it was a case of bad timing: in the moment, I didn't have a condom on me - and neither did he.

Then he said he’d got something free at a clinic that he’d kept and we could use that. He took out what he called a ‘female condom’ for me to wear. Wow, I didn't see that one coming!

I felt ashamed that he had brought the protection I should have had with me. I also didn’t have any idea how to put it on. I'd never used a female condom before.

I told him we’d have to skip it. It was getting too embarrassing for me. But he said no way. He told me he had lost his older brother to HIV and that wasn't a risk he was willing to take with his life.

He showed me how to put the condom inside my vagina and helped me get it right.

And I don't know if it was the talking we did before, or something else - but it was the best sex I've had. Very passionate and memorable.

Thanks to him I haven't had unprotected sex since!

You can get female condoms at all public health facilities and community organisations working in prevention and treatment of HIV/AIDS.